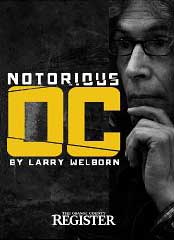 A selection of books by SSA and CSPA grads (high school, year of workshop in parentheses):

Moore, Michael Scott (Mira Costa, 1986), “Sweetness and Blood: How Surfing Spread from Hawaii and California to the Rest of the World With Some Unexpected Results,” Rodale Books, 2011.

Rempel, William (Whittier, 1965), “At the Devil’s Table—The Untold Story of the Insider Who Brought Down the Cali Cartel,” Random House, 2011. Also: “Delusion of a Dictator—The Mind of Marcos as Revealed in His Secret Diaries,” Little Brown & Company, 1993.

Welborn, Larry (El Rancho,1965), “Notorious O.C.,” Orange County Register, 2012.
Editor’s note: Readers can buy the book from the Amazon website by searching for the title or by going to this url: http://bit.ly/NjAY9h.